From home, school, or wherever you are, we would like to stay connected with you! Below you will find links to activities you can do on your own, Neat Nature Facts and Challenges, and videos that give you a behind the scenes look at our bird training! 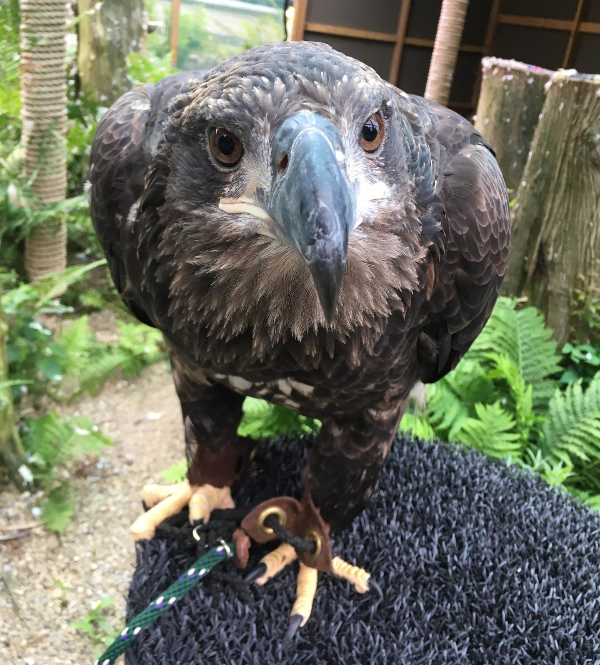 Enjoy this glimpse of what it is like to visit the Sanctuary and spend time with the birds!

Click the following links for activities you can enjoy at home! Fun for children and adults!

This time of year, we are usually hosting schools for field trips at the Sanctuary. Since we can’t do that right now, we want to share with you some of the neat nature encounters we would normally be experiencing during a field trip! Our main goal, however, is to encourage you to get outside! So check out the neat nature facts below, but then get off the computer, and go outside and explore!

NEAT NATURE #1: Want to know my favorite thing about going outside after a lot of rain? Finding animal tracks! Think of these tracks as clues! They can tell us where the animal was going and what it may have been doing. I have posted some pictures of tracks I found at the Sanctuary, as well as a guide that can be helpful in identifying tracks.

CHALLENGE: Go outside and see how many animal tracks you can find! 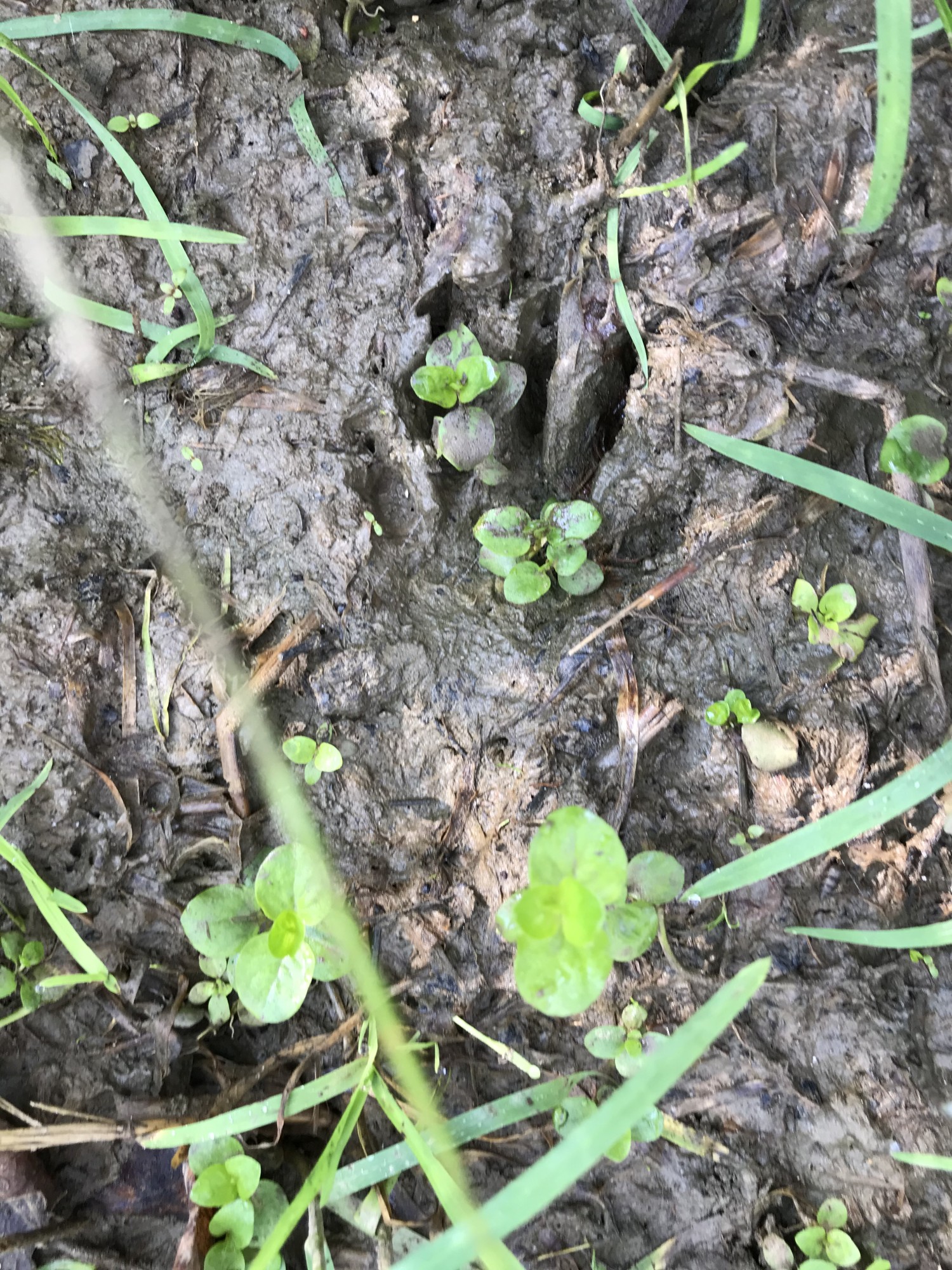 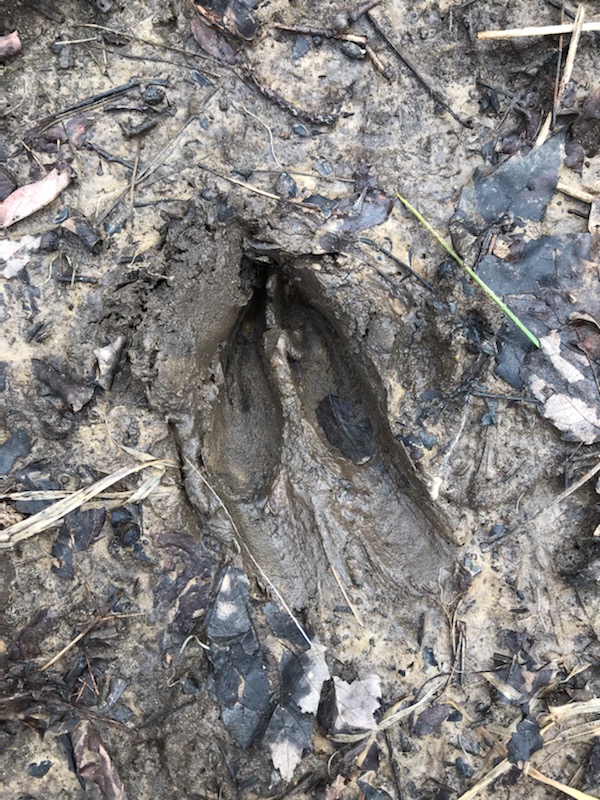 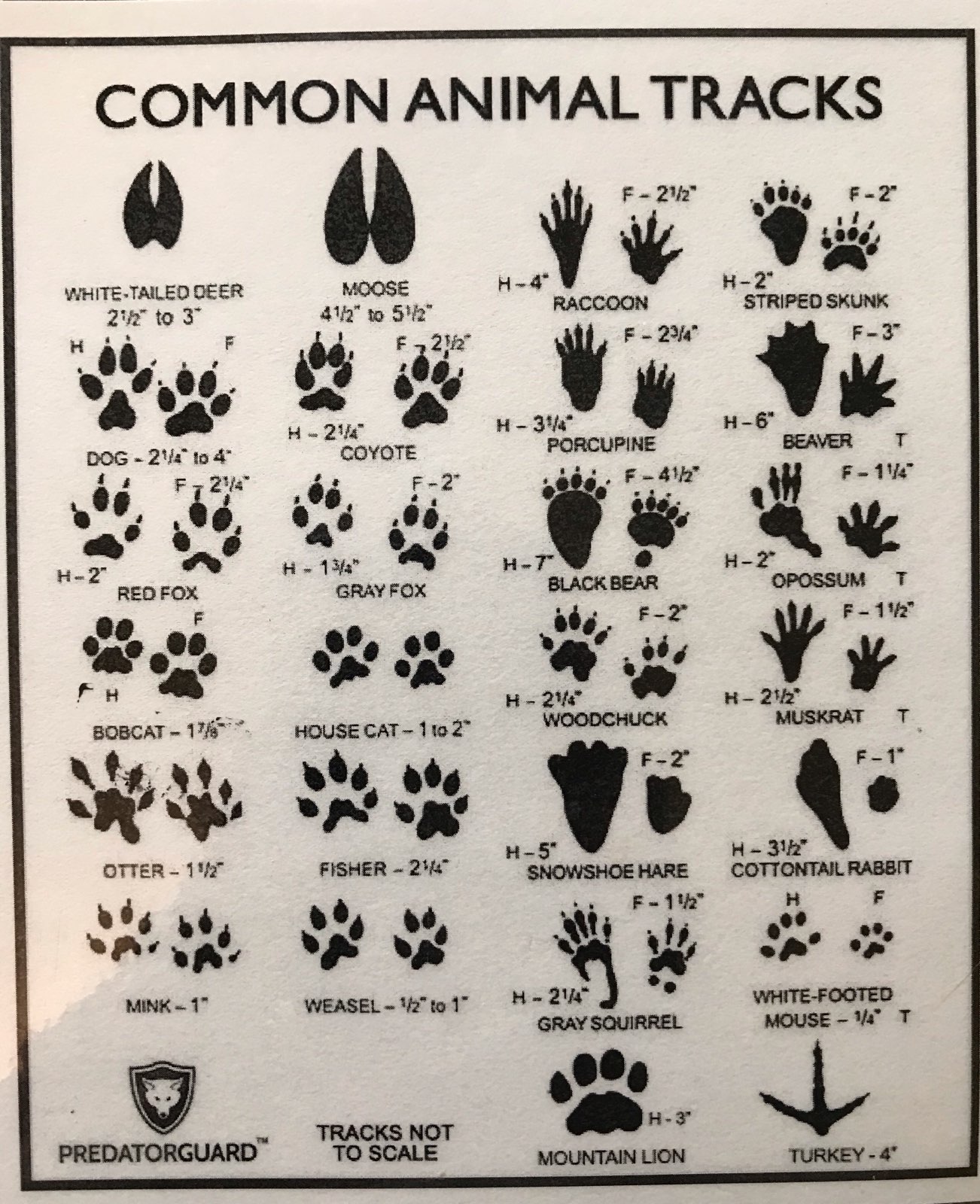 NEAT NATURE #2: Have you ever wondered what animal makes these “castles” or “chimneys"? It’s crayfish (also known as crawfish or crawdads)! These freshwater crustaceans are primarily found in lakes, rivers, and streams. They are most active at night, and that is when they get busy building their castles!

The first picture shows a smaller castle I found today at the Sanctuary. The second picture is from the ODNR website. This picture shows how tall these castles can be! (Looks like hard work to build one that tall!) The third picture is one of my campers from last year holding a crayfish he found! 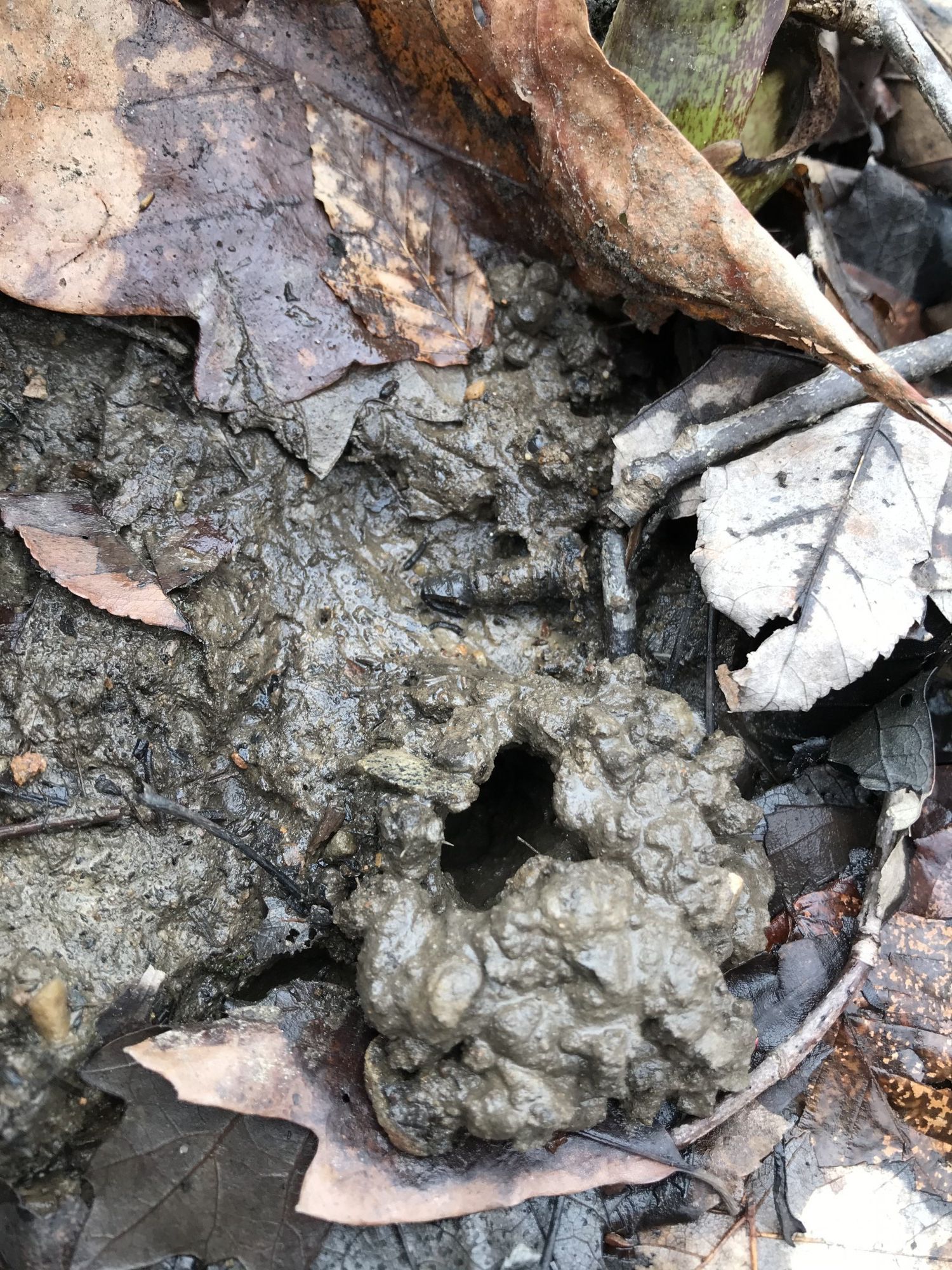 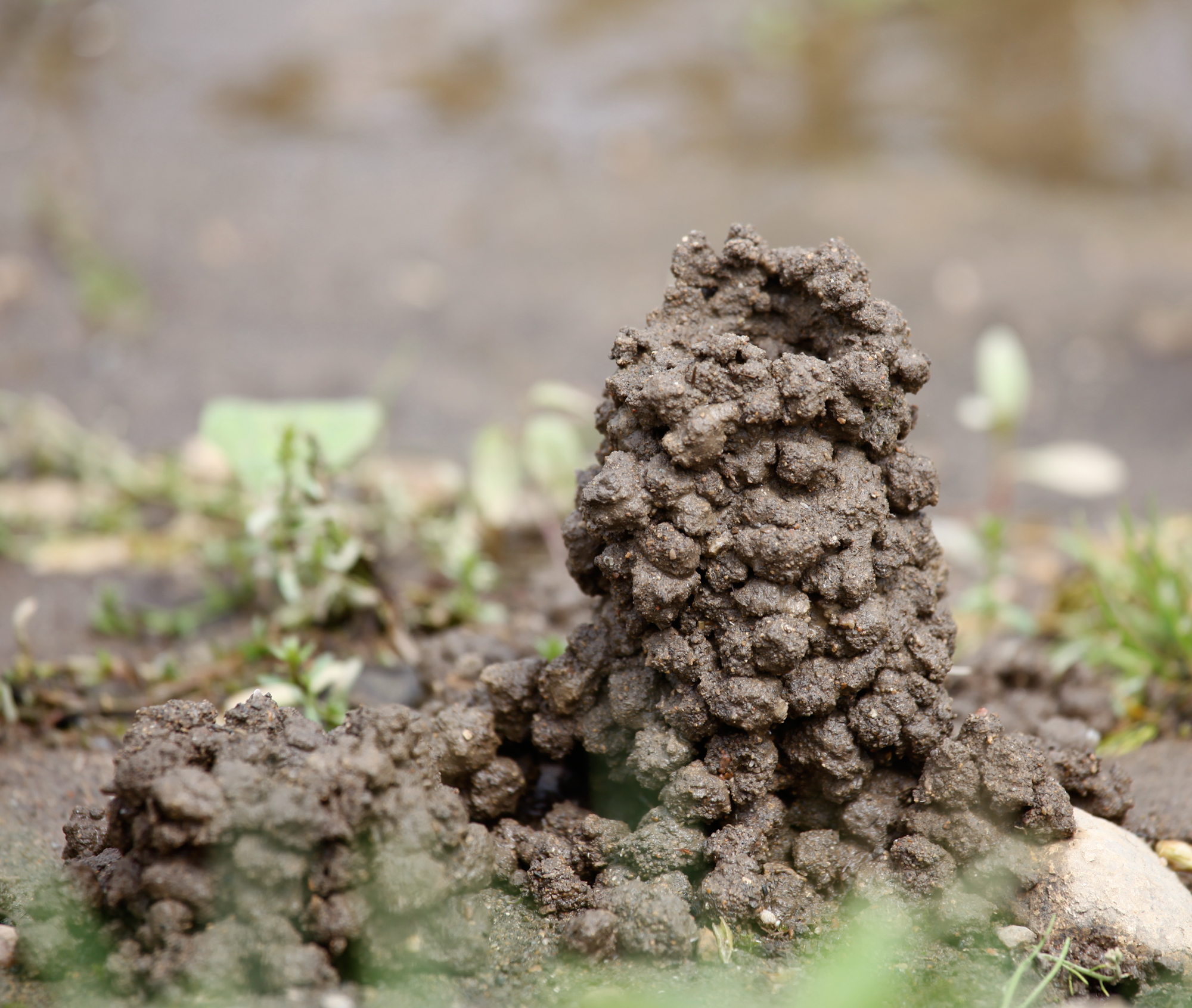 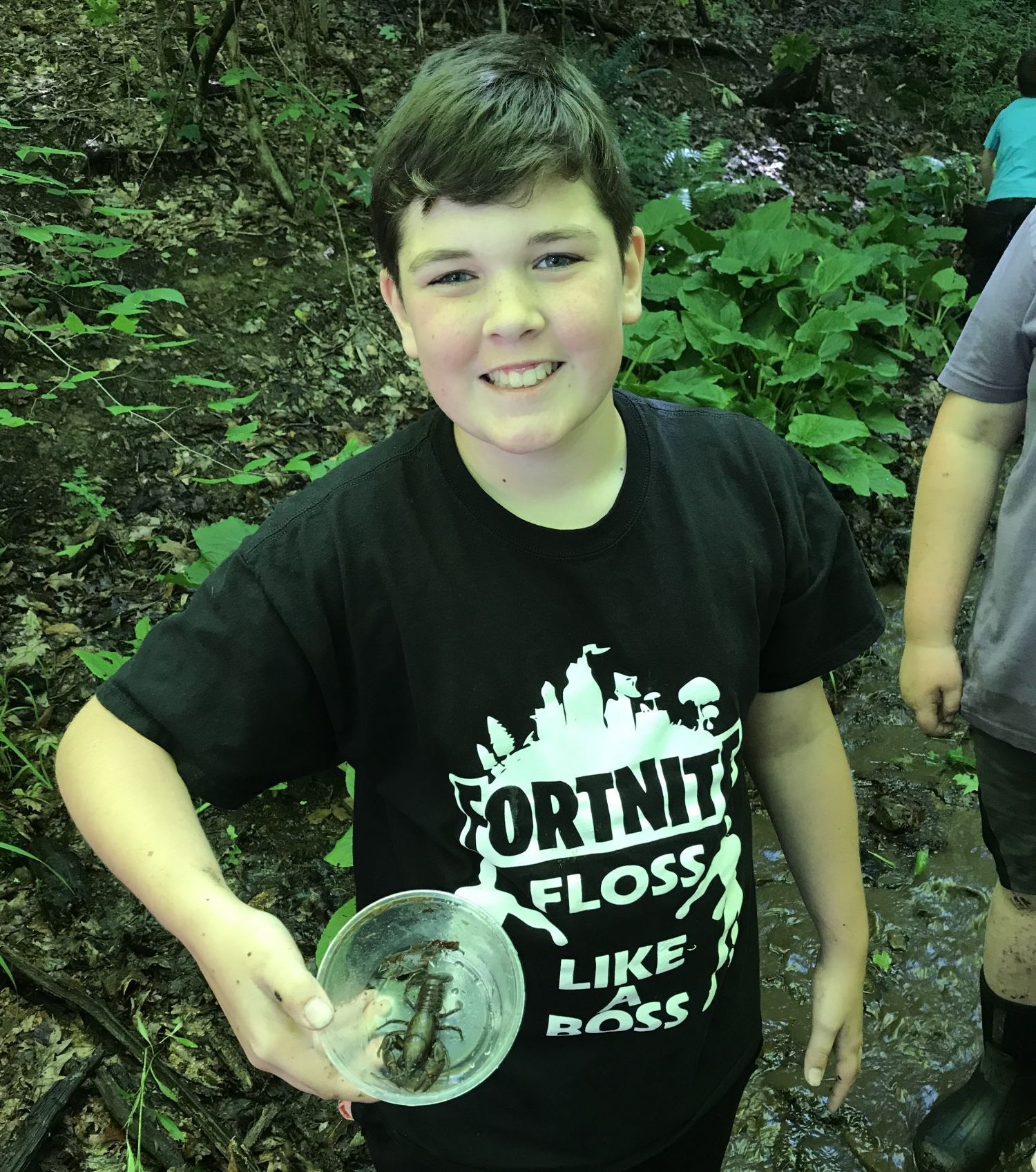 NEAT NATURE #3: Bowl and Doily Spiders! Not only is that the coolest name for a spider, but these spiders make the coolest webs too! Like their name suggests, Bowl and Doily Spiders build webs that resemble a bowl with a doily under it. Above the bowl are threads of web that when an insect flies into them, they knock the insect into the bowl. The spider waits under the bowl for its prey to fall inside.

CHALLENGE: The weather is beautiful today! Go outside and see what other types of spiders or insects you can find!

These webs are all over our meadow at the Sanctuary. When the sun hits them just right, it is easy to see their bowl and doily shape! 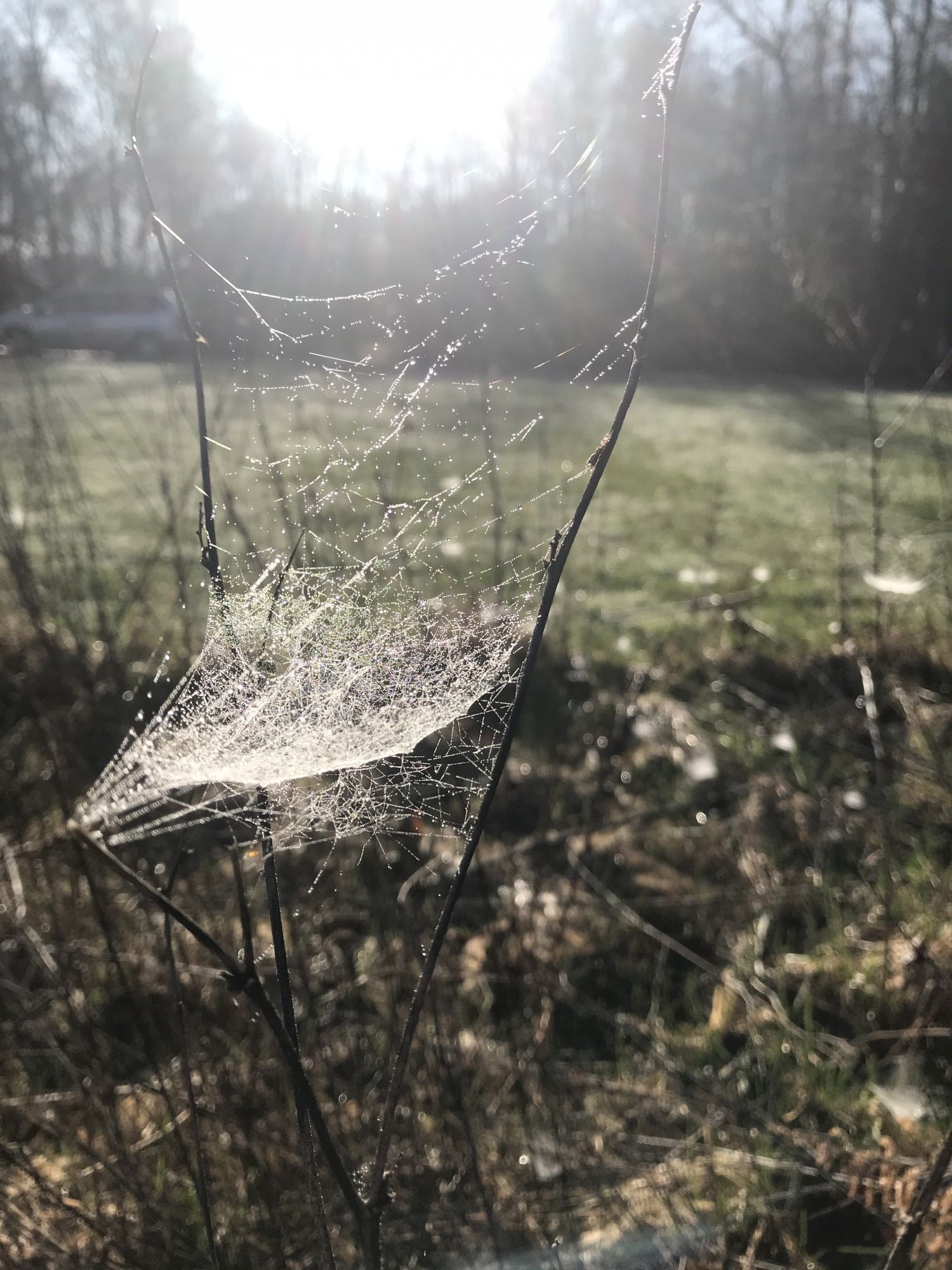 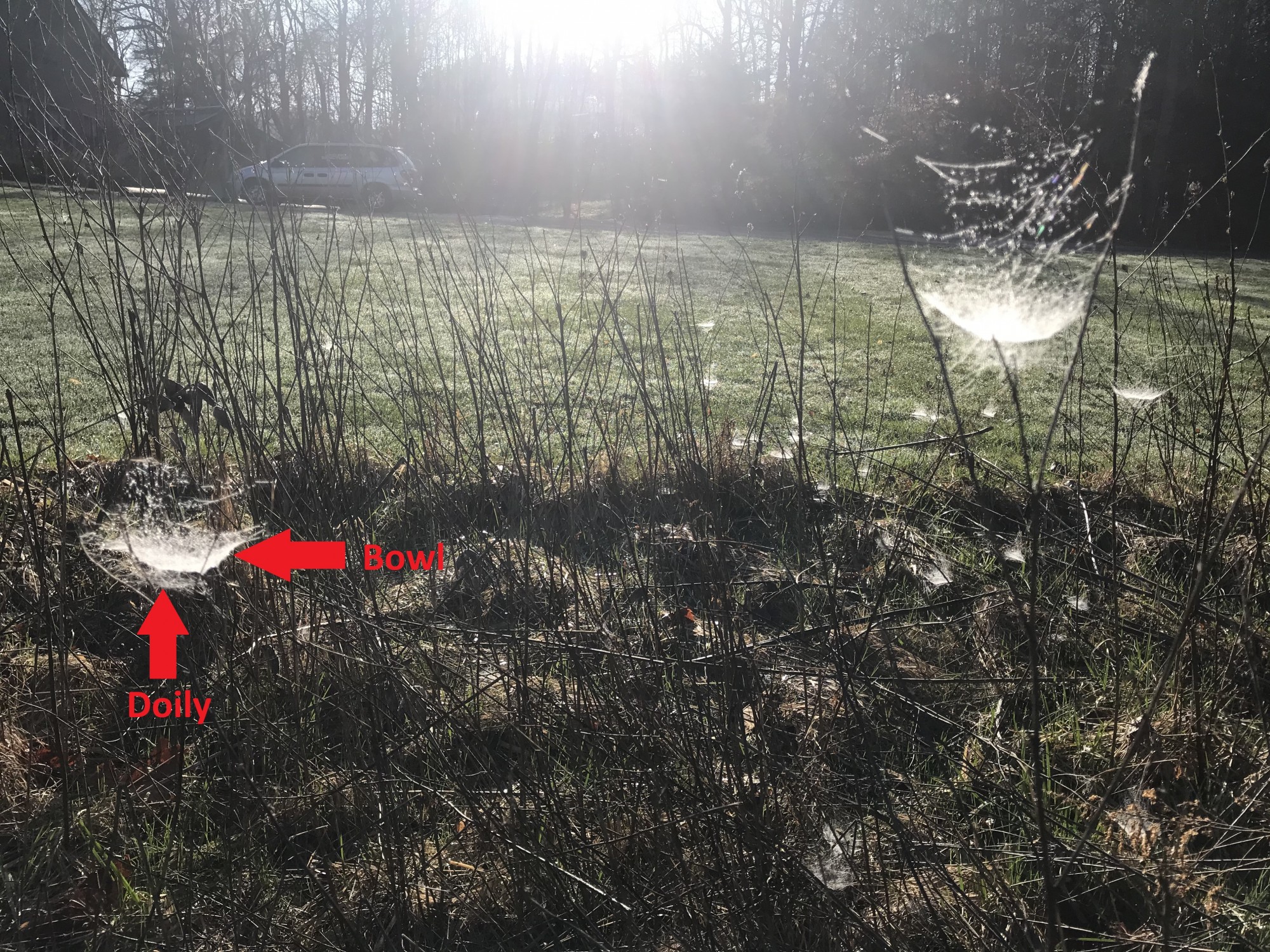 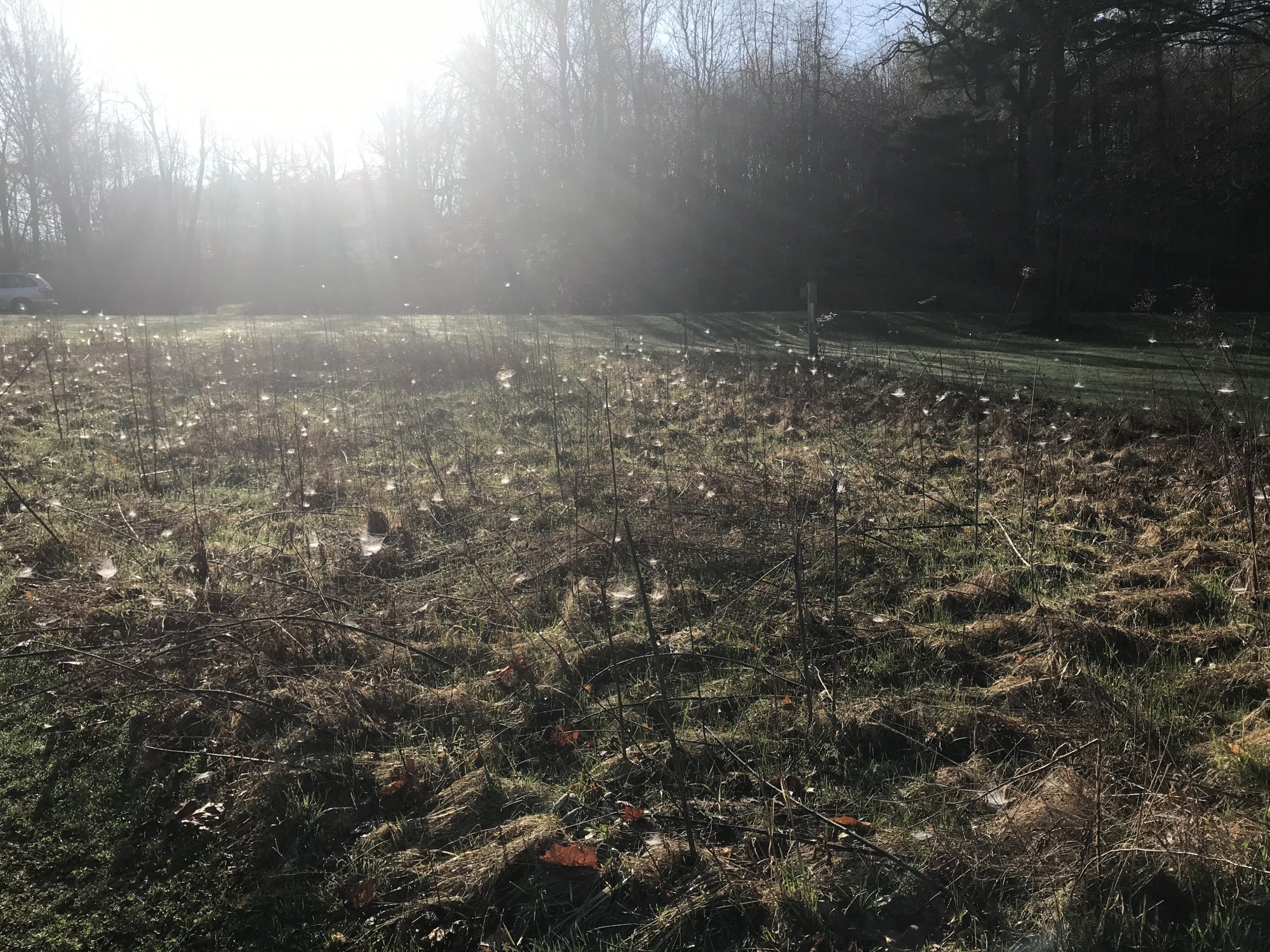 CHALLENGE: Many bird species are singing right now to attract mates or mark their territories. Go outside and listen to all the different bird songs! How many do you hear? Can you match the songs you hear to any specific bird species?

NEAT NATURE #5: We are seeing more bird species as they return from their wintering grounds! Many species of birds fly south for the winter and then return in the spring when food and nesting sites are more plentiful. Just down the road from the Sanctuary, along the reservoir, we spotted Great Egrets, American Coots, Canada Geese, Trumpeter Swans, Mute Swans, and more!

CHALLENGE: See how many different species of birds you can spot in one day! How about one week!

NEAT NATURE #6: Skunk Cabbage! What a lovely name for a plant, right?! As you can guess, these plants smell like a skunk. But what is really neat is they are one of the first plants to flower in the springtime! Skunk Cabbage has a way of creating its own heat, so even if the ground is frozen or covered in snow or ice, it can melt it! In the picture, the purple part is the “flower.” Soon the plant will have large cabbage-like leaves.

CHALLENGE: Take a hike and see if you can locate any Skunk Cabbage! Hint: It prefers to grow in swampy, wet areas. 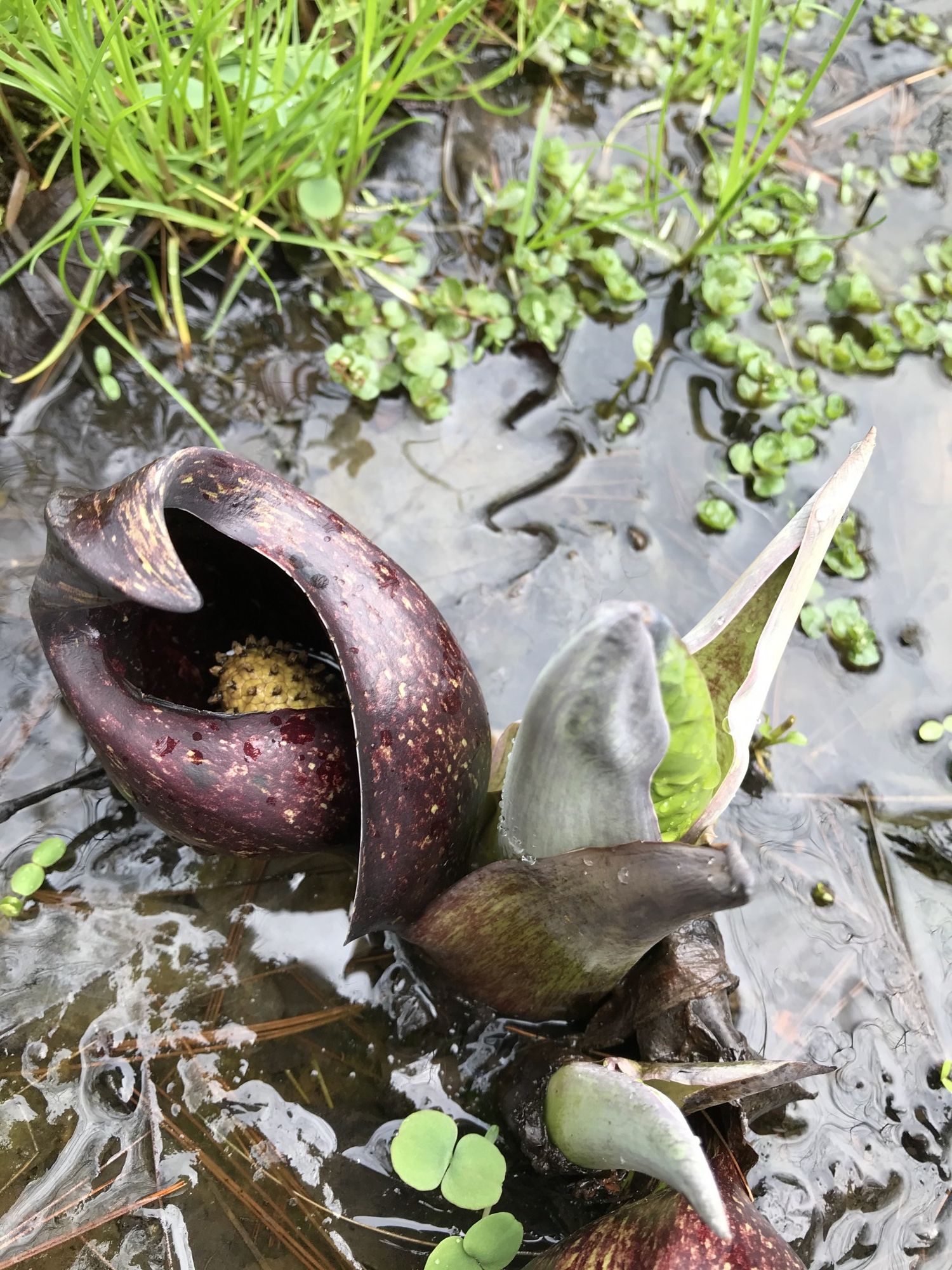 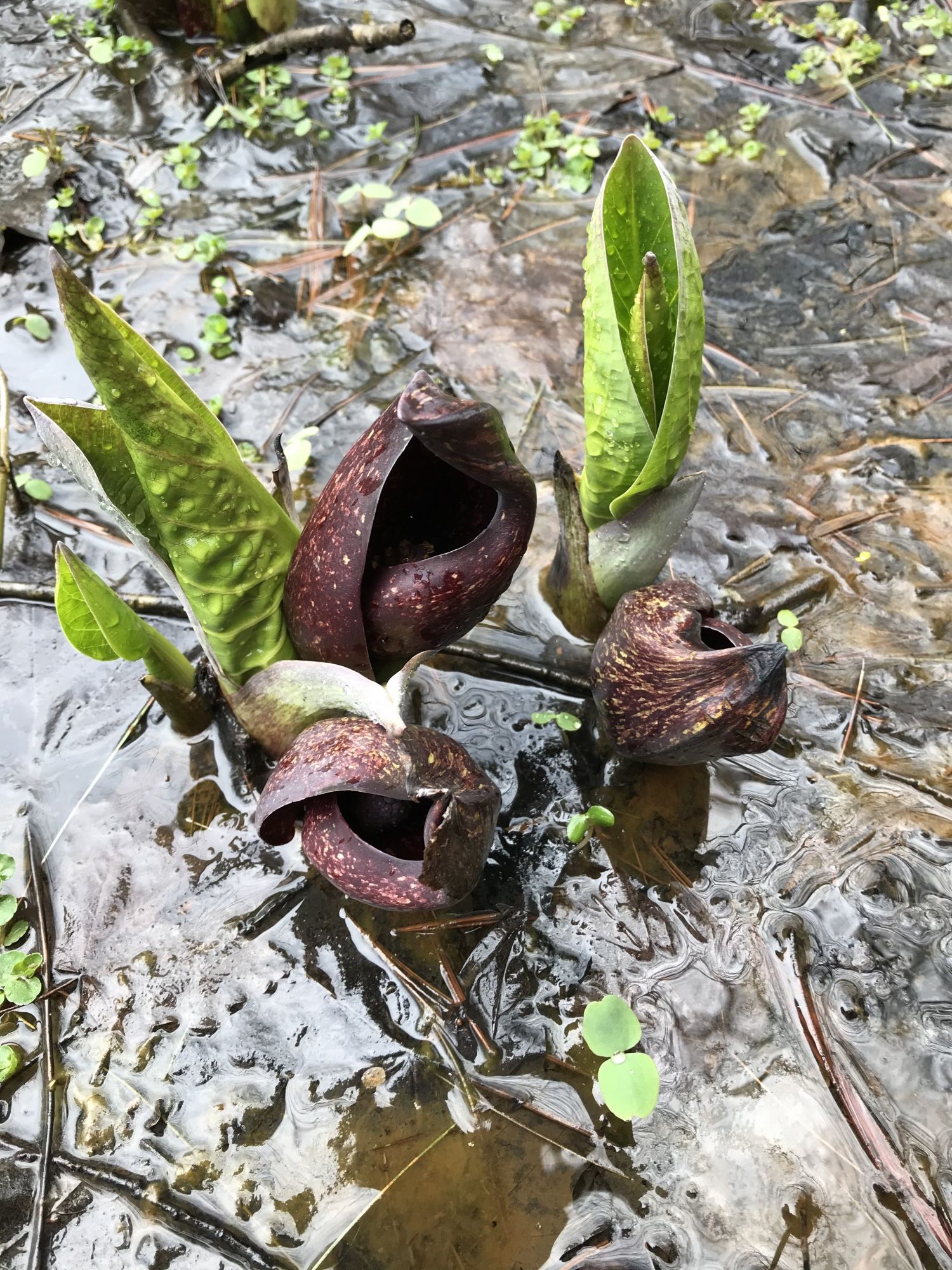 NEAT NATURE #7: Meet North America’s heaviest flying birds – Trumpeter Swans! The Trumpeter Swans in the first picture were hanging out just down the road from the Sanctuary (along the reservoir). These beautiful birds are considered a threatened species in the state of Ohio, but their populations are recovering thanks to wetland habitat restoration and control of invasive species such as Mute Swans.

I have also posted an up-close picture of a Trumpeter Swan from the ODNR website. 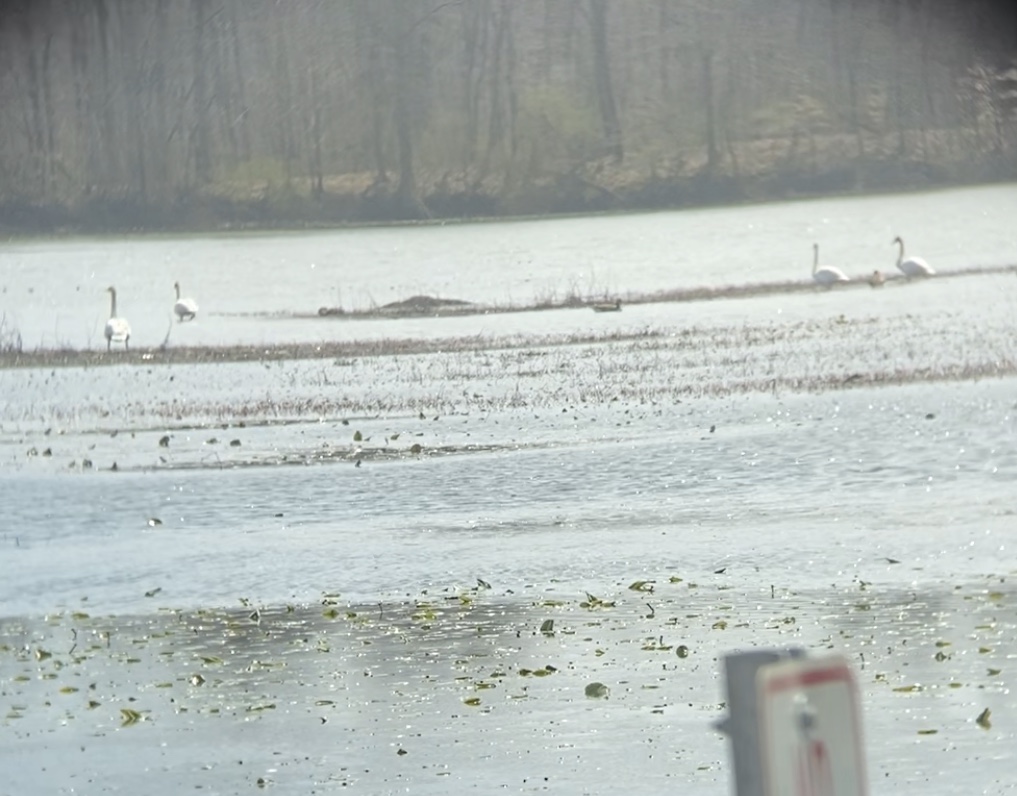 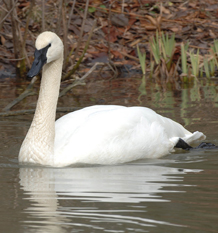 CHALLENGE: Go for a hike to see how many amphibians (such as frogs, toads, and salamanders) you can find! Hearing them counts too! 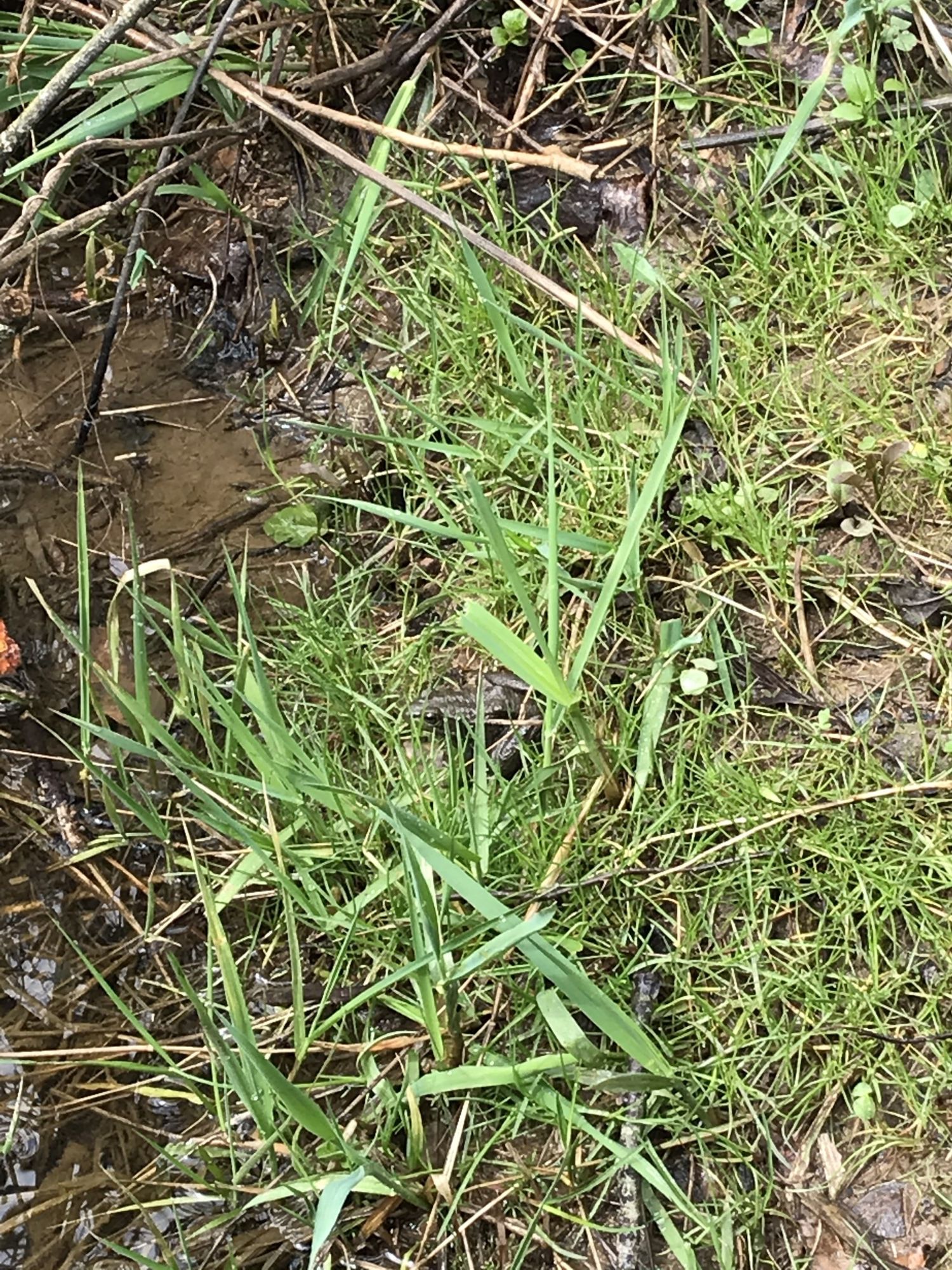 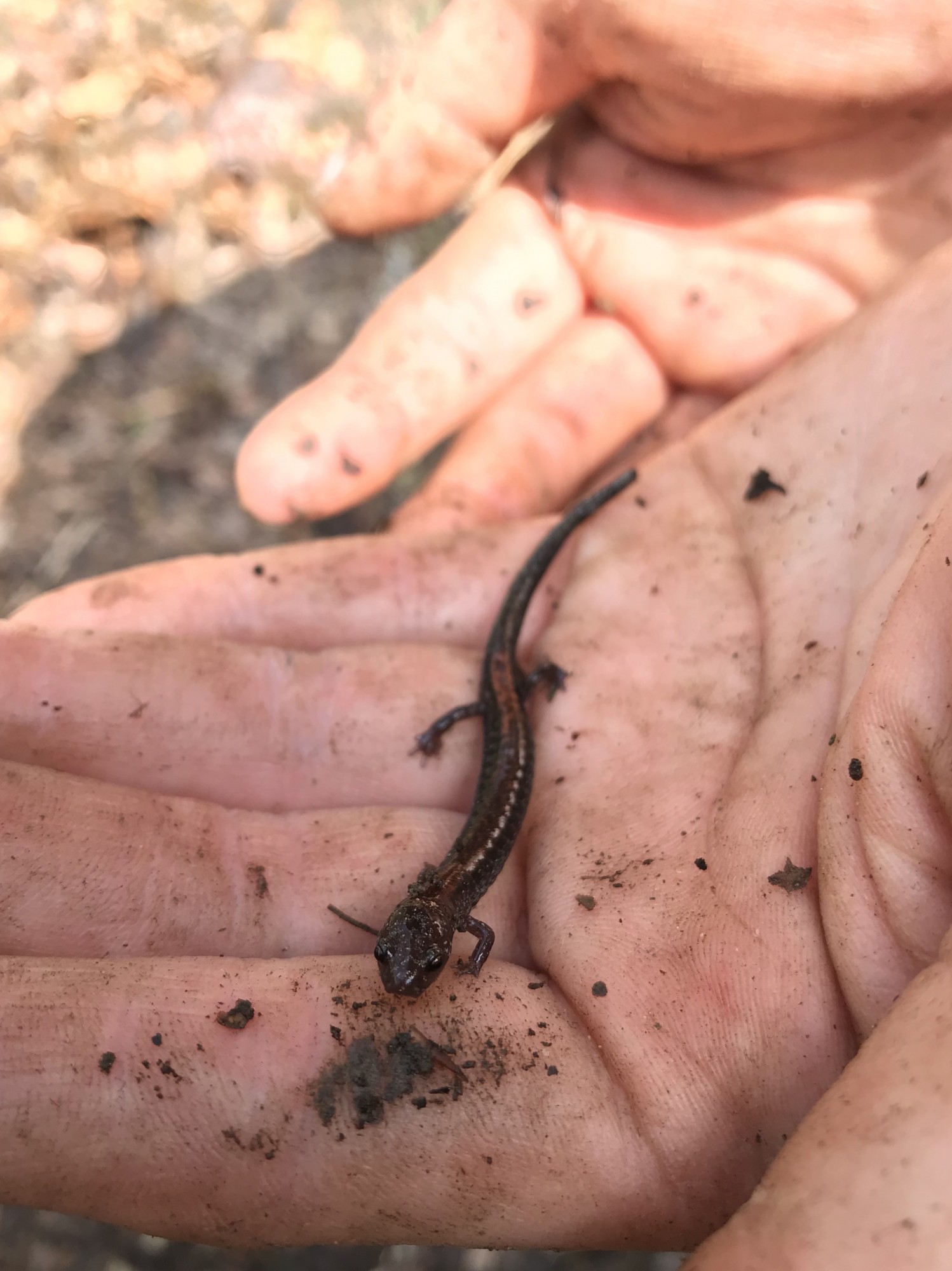 NEAT NATURE #9:  It’s nesting season for many bird species! Did you know Turkey Vultures will nest on the ground?! Devon Reinhart, who is working on his Eagle Scout project at the Sanctuary, came across this Turkey Vulture “nest” that is on the ground inside a hollowed tree stump. Last year, he was able to observe the same nest and watch as the young Turkey Vultures grew up (second and third pictures)!

CHALLENGE: See if you can locate a bird nest! Watch from a safe distance using binoculars!

Special thanks to Devon for sharing the pictures with us! 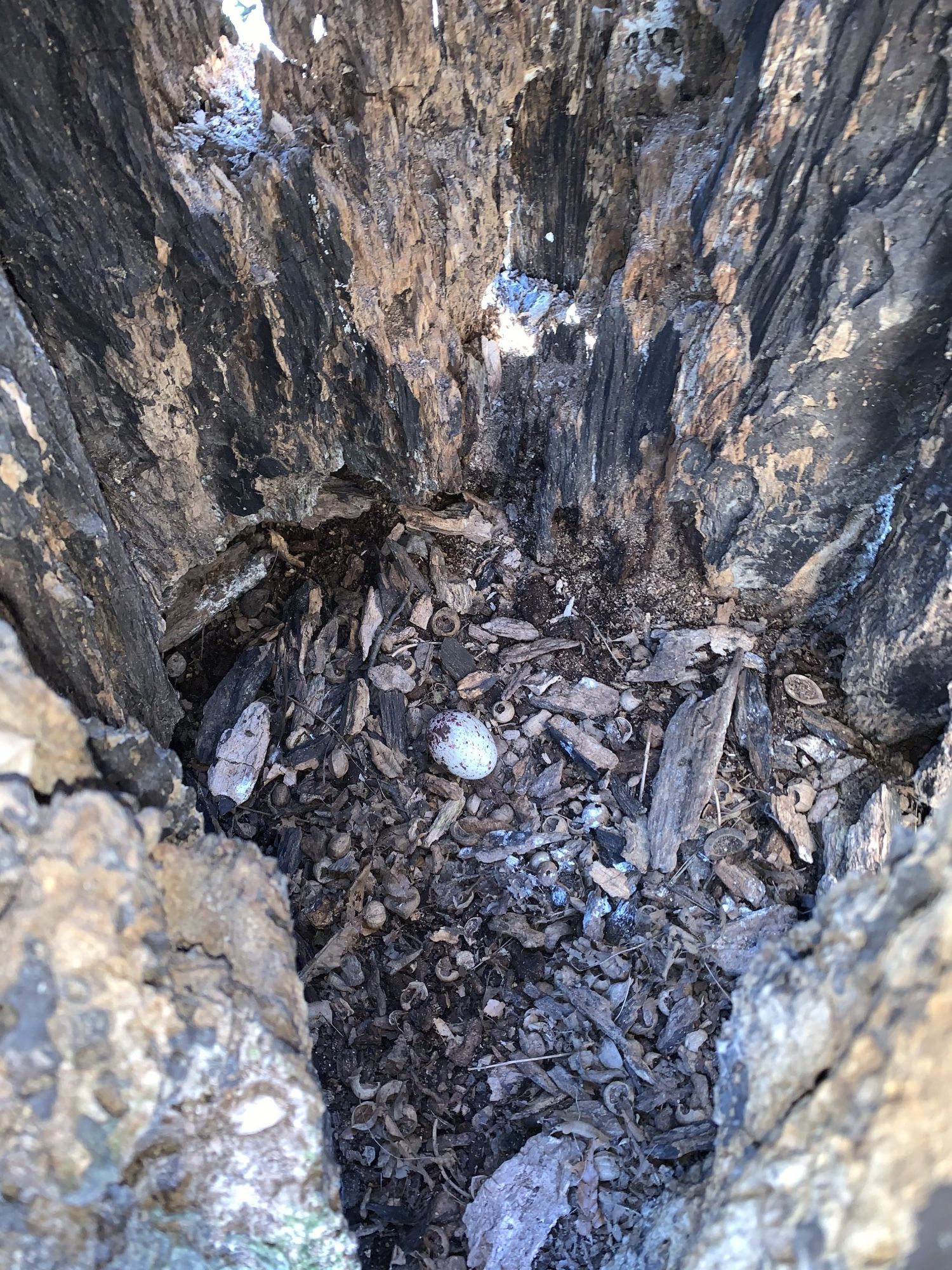 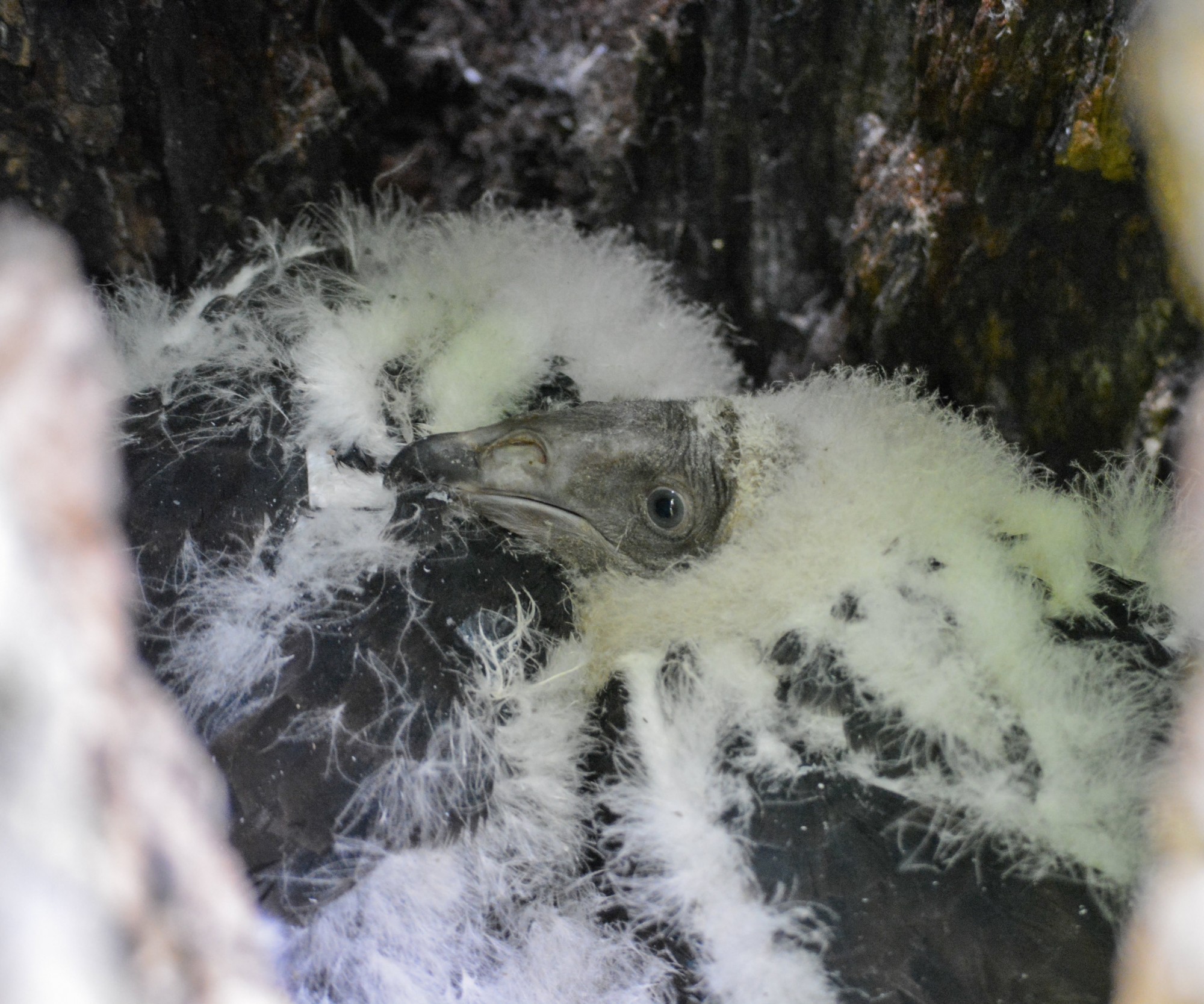 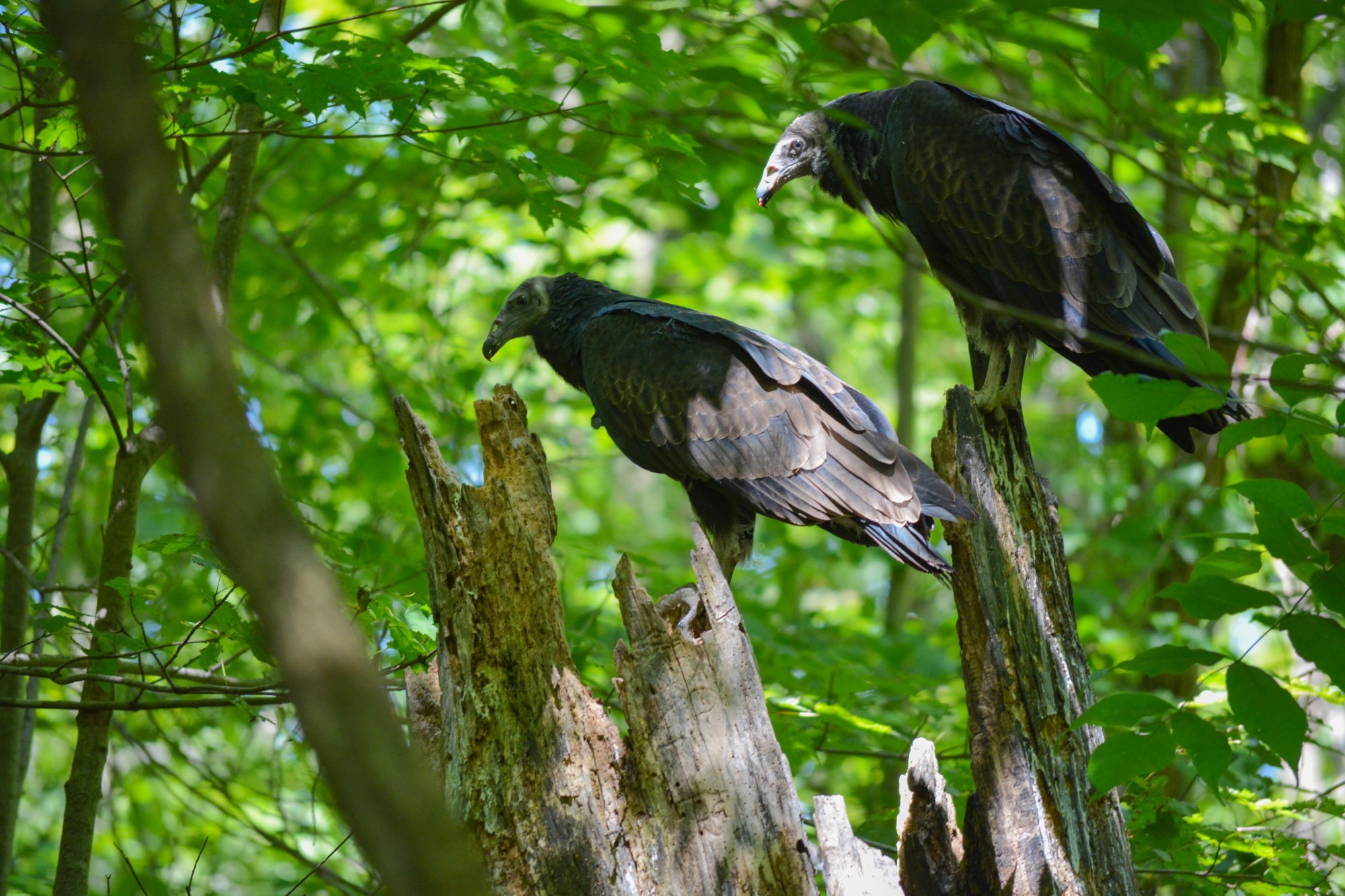 NEAT NATURE #10: While checking the bluebird boxes at the Sanctuary, I found that a few of them have bluebird nests built in them and two have eggs! Eastern Bluebirds build their nests in cavities, so they will readily use nest boxes. As seen in the pictures, grasses and pine needles are their preferred building materials. 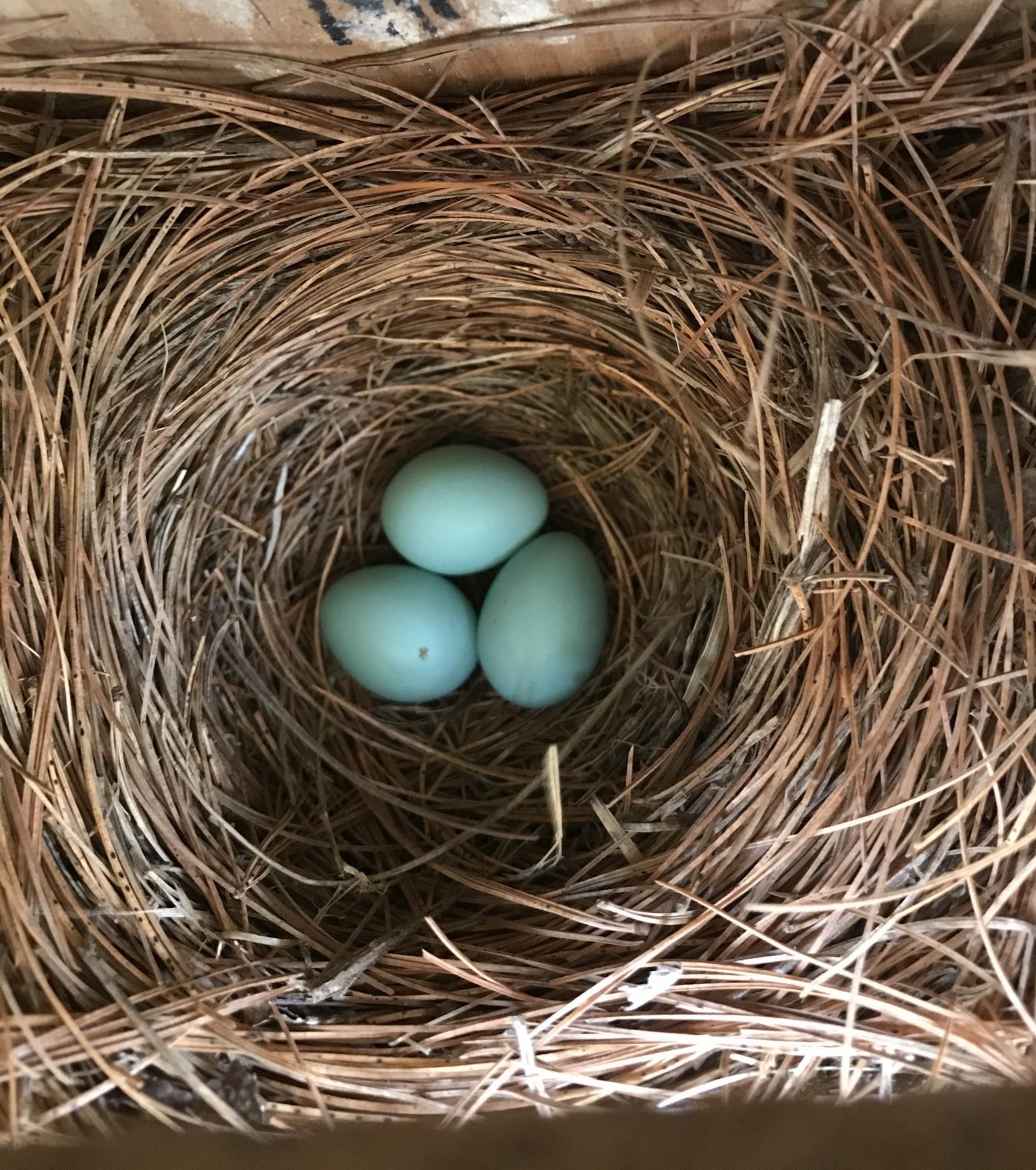 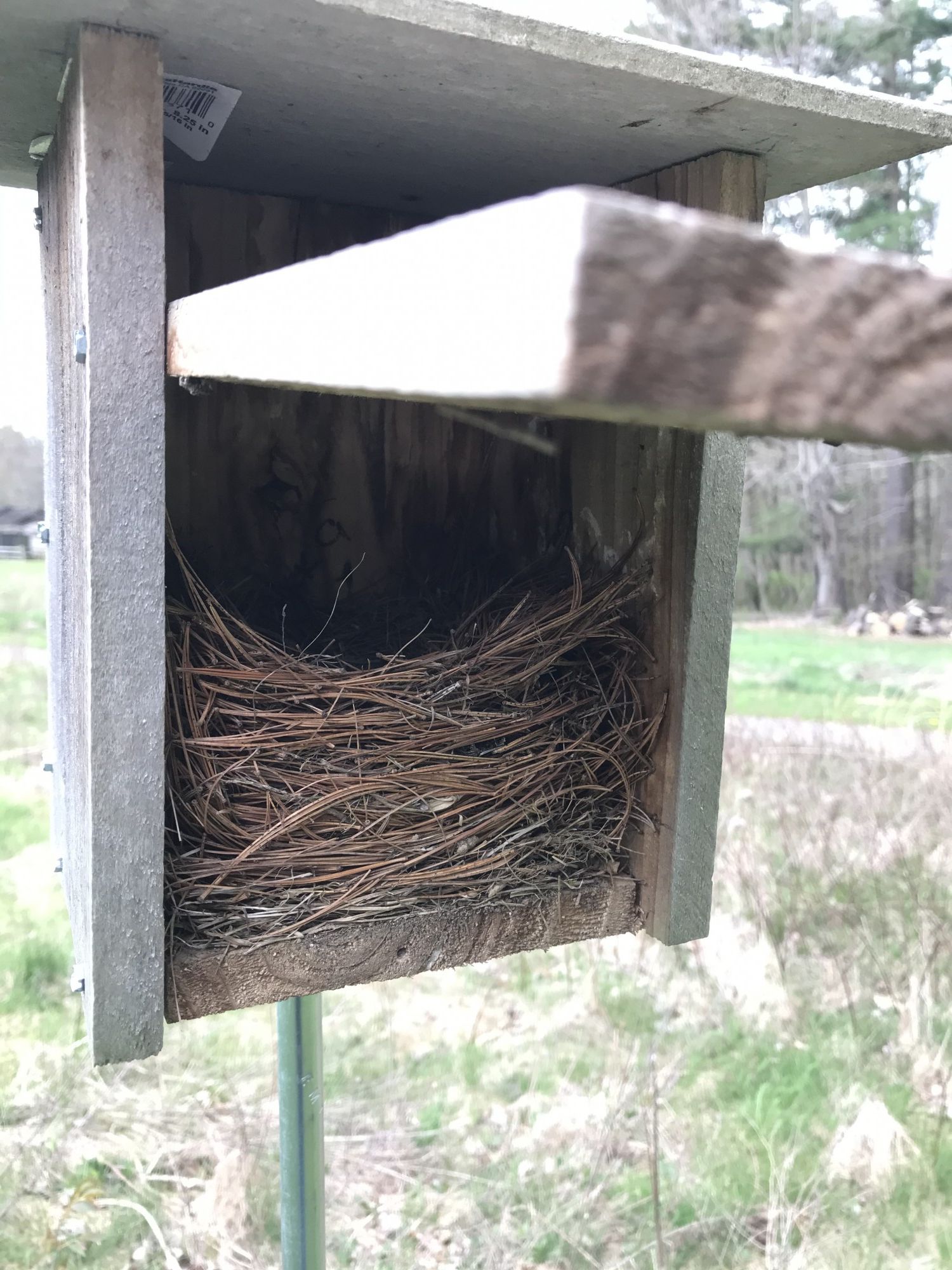 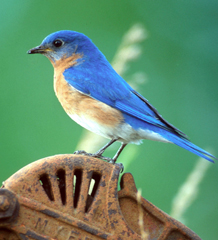 NEAT NATURE #11: Several Eastern Phoebes have decided to build nests around the Sanctuary! None have eggs in them yet, but hopefully they will soon! As you can see in the pictures, Eastern Phoebes build their nests using mud, moss, and grass. If you look closely at the second picture, you will notice that this nest was built on top of a nest that was built last year! 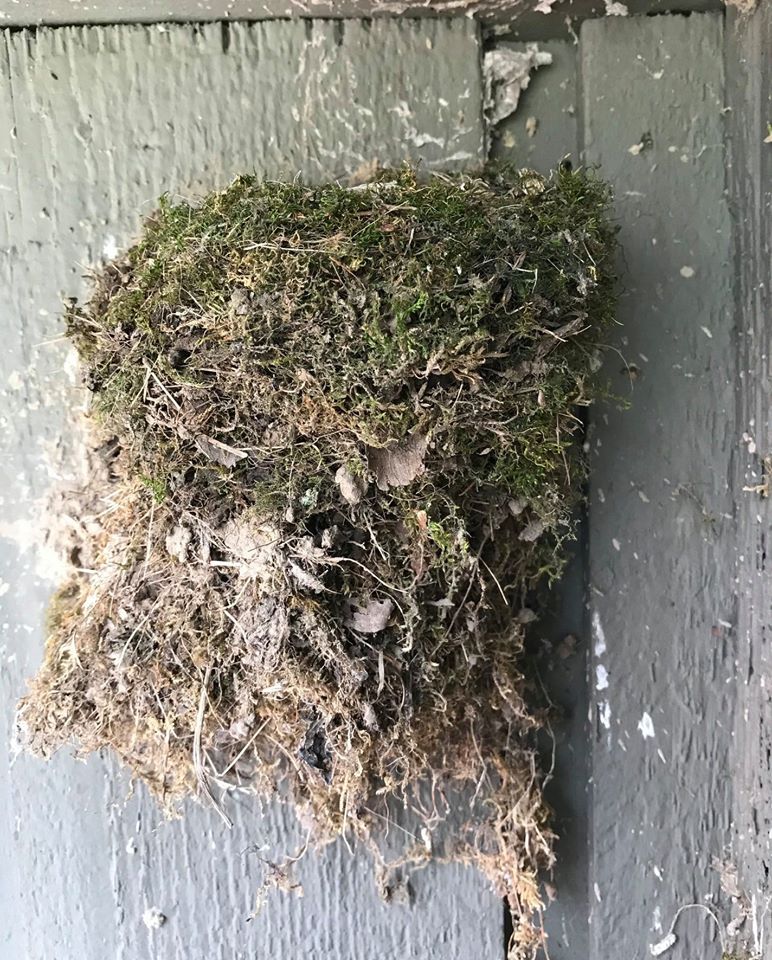 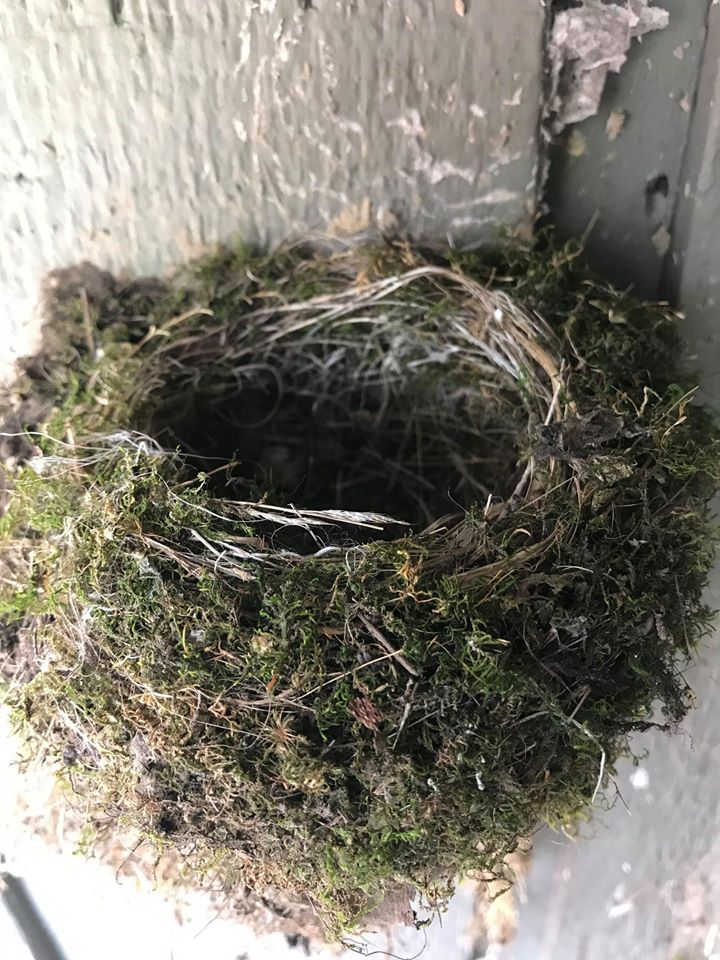 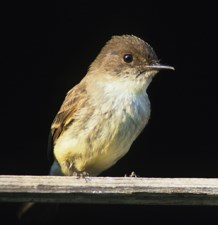 NEAT NATURE #12: Since we are on the topic of nests, I wanted to show you a couple more neat nests! The first is a Cliff Swallow nest. These “gourd” shaped nests are made up of mud pellets. The second nest is a Eastern Phoebe nest (see Neat Nature #11). The third nest is a Barn Swallow nest. These “cup” shaped nests are also made using mud pellets, but they include grasses as well. All three nests were found in Gail Laux’s barn (OBS Director)!

NEAT NATURE #13: Lichen! Did you know that lichen is actually two organisms functioning as a single unit? Lichens are made up of a fungus and an alga. The fungus provides a physical structure while the alga provides the food. This is an example of a symbiotic relationship—one in which both organisms benefit!

CHALLENGE: There are many symbiotic relationships in nature! Can you think of any others that benefit from great teamwork? Even better, can you go outside and find an example of one?! 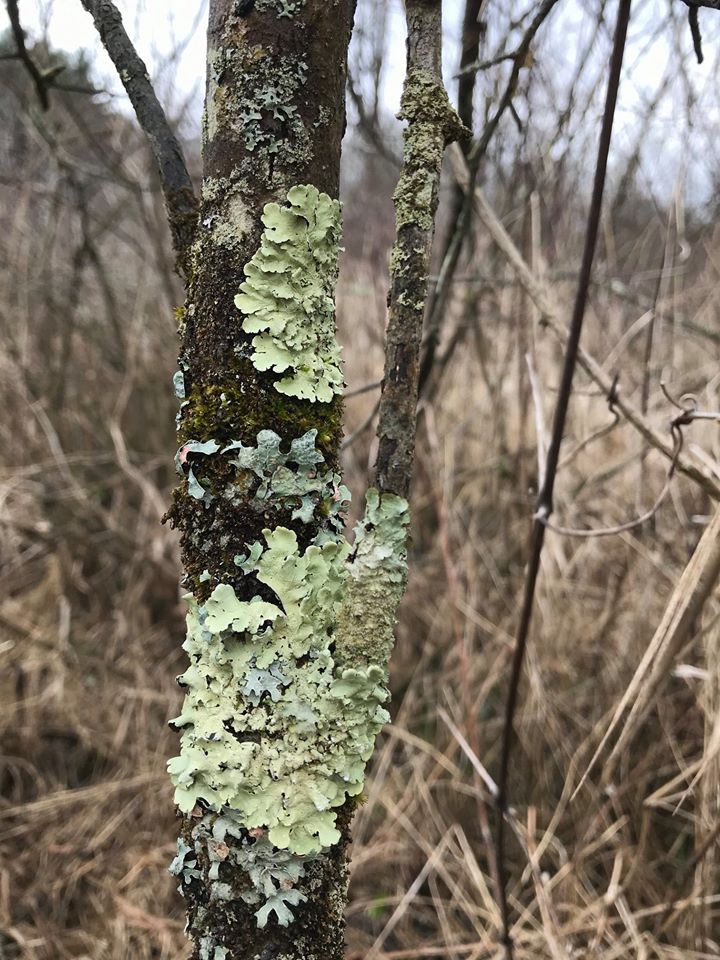 NEAT NATURE #14: Brown-headed Cowbirds. In the previous Neat Nature post, we looked at lichen—an example of a symbiotic relationship in which both organisms benefit (also known as mutualism). Today, let’s look at an example of a relationship in which one organism benefits while the other is harmed. Brown-headed Cowbirds are brood parasites, meaning they lay their eggs in the nests of other bird species. The Cowbird young quickly outgrow the young of the host species and will frequently displace the host’s eggs and young.

CHALLENGE: Now that you know about two types of symbiotic relationships (mutualism and parasitism), see if you can identify examples of each! 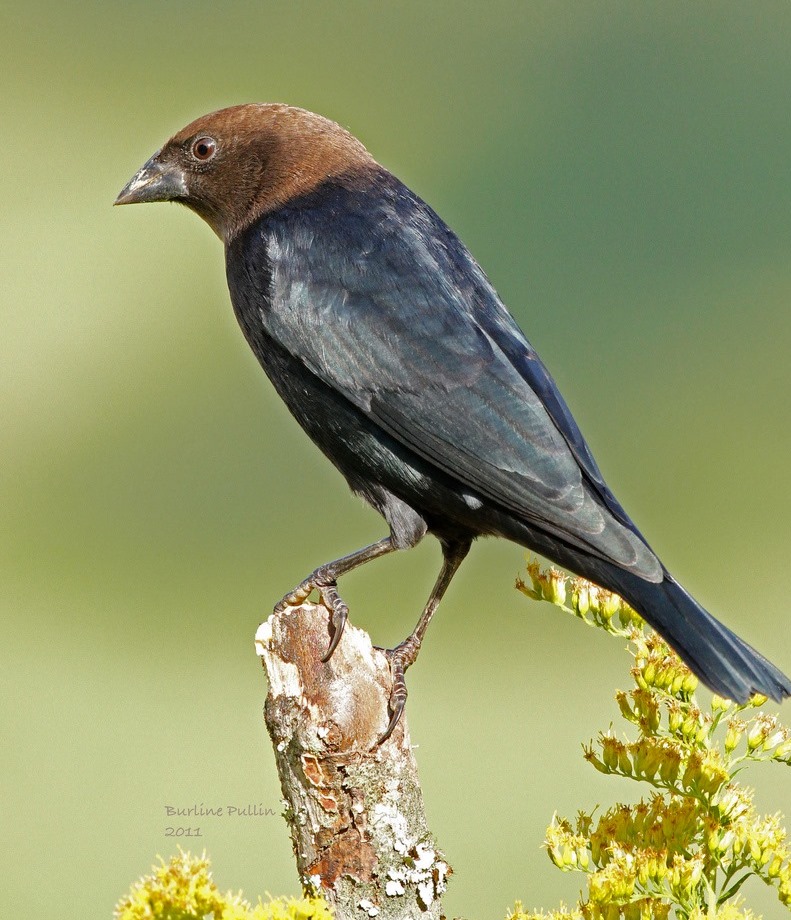 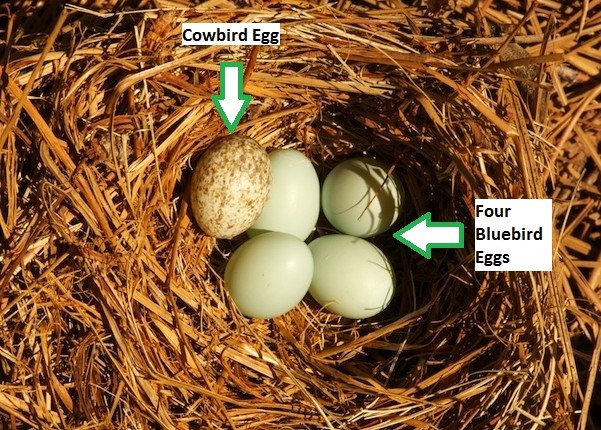 Behind the Scenes Look at Our Bird Training!

The Sanctuary Staff regularly work on training with our education birds. Videos of some of the training can be found below as well as on our Facebook Page!

Session One: Stephanie is working with our Red-tailed Hawk, Ruby. Ruby is an older bird we received from another facility. Her training protocol is different than a bird that has never been on the glove. Every facility trains their birds differently so we are starting at the beginning with Ruby by developing a relationship of trust. Stephanie’s current goal is for Ruby to trust her and allow her to put on her equipment.

Session Two: Ruby is learning to trust the glove. Stephanie is just wearing the glove while doing her regular training routine. You can see that this addition has not phased Ruby because of the foundation of trust that has been built. In this video, Ruby displays an understanding that she is to ‘meet’ Stephanie at the front perch! Next step will be to ask her to step onto the glove with that same confidence and understanding.

Session Three: Ruby is learning to trust the jesses. Over the past week, Stephanie has gained Ruby’s trust regarding stepping onto the glove. The next step is rebuilding trust of the jesses. Jesses are the straps that are tread through the anklets that the handler holds onto. If during the training process these are used too soon, they will create a negative relationship with the glove. Ruby had been trained to the glove before she came to OBS and has some anxiety about the jesses. In this video, Stephanie is asking Ruby to step onto the glove, and she moves the jesses around but never uses them for restraint. She asks Ruby to step on and off the glove to show her that she has a choice and is not being forced to remain on the glove. When Ruby steps on and off without fear, Stephanie rewards the good behavior. The goal is for Ruby to be confident and choose to stay on the glove. The jesses are only there to prevent a fly off if she should get startled. Next step is leaving her enclosure!

OBS Director, Gail Laux, with Ichabod the Turkey Vulture. This session is another example of positive interaction to maintain a strong working relationship with the program birds. Ichabod is an imprint so one of his favorite activities is to make nests with his ‘mate’. (Second favorite thing is to make the rest of the staff nervous. You will notice that Emily who is filming keeps a healthy distance). By taking time to spend positive time with the birds, we enrich their lives and create happy educational partners.

Elliott is demonstrating a technique called “target training”. This is commonly used to train animals to shift from one place to another and to bridge many of the behaviors required by service animals. In this video, Mary is working with Elliott the Black Vulture. Our goal is to have Elliott participate in our onsite programs by entering and exiting on cue. (Special guest at the end!)

Other Videos of the Sanctuary

Visit Red-shouldered Ridge Trail. This trail winds through stream beds and climbs to the highest point of the Sanctuary. Enjoy the hike!

Enjoy this peaceful moment with our birds!

My 5yr old twins loved feeding the blue jays in the aviary! It was hilarious when they landed on our heads. We'll definitely be back!
Michele Reyes