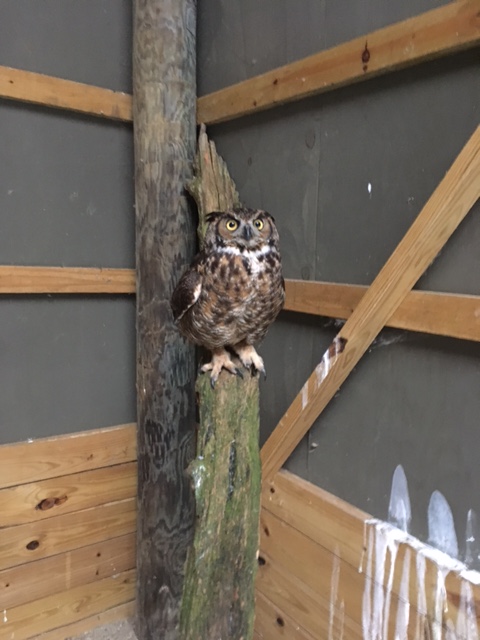 Summer is by far our busiest time of year at OBS, but sometimes in the middle of a quiet winter season, we get a flurry of new avian patients. As we begin a new year of caring for the birds, this month's blog series will feature some of the birds currently going through the rehab process.

First up, we have a Great horned owl!

This owl was brought to OBS by a family who found it down on the ground in their yard. They did all of the right things for this bird: They noticed that something was wrong, called us for advice, captured the bird, and promptly brought it in so that we could care for it.

As we evaluated this owl, we found that it was dehydrated and starving. This told us that the bird had been doing poorly for a while. But the only abnormality that we could see were several missing primary feathers on the bird's left wing. The primary feathers are very important for flight, so losing these feathers meant that the bird could no longer fly well or hunt, hence why it was starving and down on the ground. We suspect the bird may have been shot, due to the nature of the injury. In case you were wondering, it is illegal to harm a native Ohio bird, according to the Migratory Bird Treaty Act. 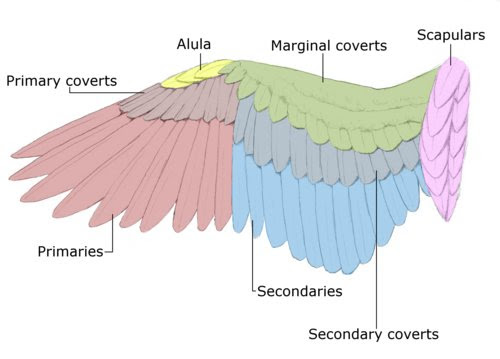 Our first step was to address the starvation and dehydration. We gave the owl electrolytes and a special liquid diet for the first 24 hours, which helped to ease her system back into working order. Sometimes in the beginning, less is more: Giving her solid food right away could have put too much stress on her digestive system and caused it to crash. Once we knew that her digestive system was functioning, we could transition her to soft solid food. Gradually she began to eat on her own and soon she could handle whole food again (whole rats, that is).

Currently this owl is in good condition! She is living in an outdoor enclosure as we continue to get her back to a healthy weight, at which point we will be able to address the problem of missing feathers through a process called imping. "Imping" is a technique whereby we can implant feathers. I remember the day this owl came in and our director Gail was explaining to the family about how we could implant feathers so that the owl could be released sooner. I wish I could've seen my face because I'm pretty sure I looked like I thought she was making this up! I had never heard of such a thing. But lo and behold, it is a tried and true tactic.

To start, we will take primary feathers from a great horned owl that was brought in but did not make it. Then, with careful precision and a little bit of glue, we will implant those feathers into the feather shafts of this great horned owl's wing where her own feathers are missing. This process will allow her to return to the wild much sooner; otherwise, she would have to stay in our care until she went through a molt, which could take up to a year.

After we complete the imping, we will monitor her for a few days to make sure everything is in good shape. Then she will be ready to be released back in her home territory!

« Back to Takeover Tuesday
Walking trails are so nice. My 8 year old told me she loved it!
Sarah Stanley Frost