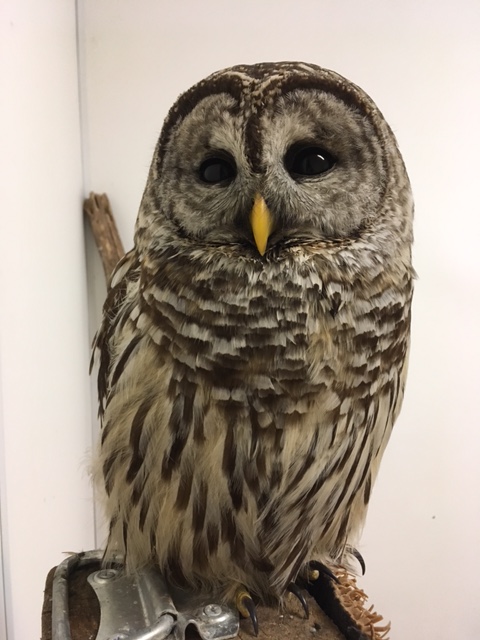 This week, we are featuring a Barred owl that we received just before the new year.

At the Sanctuary, we often find ourselves wishing these birds could talk and tell us exactly what happened because there are many times when we do not know the full story. This Barred owl was found in the road about a week before he was brought in for care.

This is never a great scenario, hence why we encourage prompt admission of the bird to a rehab facility if you find an injured bird. The first few days after an injury are a critical time and treatment during this time can often mean the difference between a life in captivity or release.

Upon examining this owl, we did not find any fractures, although he had some scrapes and abrasions. The main issue he was suffering from was head trauma. He had a bad headache caused by impact with the car and had been dealing with this headache for a week now, since he had not been brought to us right away. His vision was also questionable at this point.

We immediately started treatment by giving him a medication to help with the swelling in his brain, which was causing the headache. We started him on the proper diet, but he needed us to feed him because he was not aware enough to eat on his own yet.

It has been a little over two weeks since this patient arrived on our doorstep and we are pleased to report that he has responded to treatment more than we thought he would. He appears to have at least some of his vision back, as he is able to move from one perch to another in his enclosure. He has graduated to eating whole mice on his own, so we no longer have to cut his food into pieces and feed him with forceps. He is also exhibiting some natural behaviors, like clacking his beak to let us know that he is not pleased when we have to go into his space to clean it. This is normal for a wild owl and is exactly what he should do in response to people.

We still are not sure that this guy will be able to be released eventually, but he has also shown us some great improvement in the last two weeks. The next step will be to move him into an outdoor enclosure. Then we can see if he is able to find food in a larger space, which will tell us more about his vision. We will also check to make sure he can hunt before we determine if he will be released.

This owl is a fighter and we are hopeful!

His story has some good reminders for if you do find a bird in trouble.

1. Promptly bring the bird to the Sanctuary or to a rehab facility in your area. Not only do we have the ability to diagnose and treat the bird, but it is also illegal for you to have the bird for longer than 24 hours.

2. Keep the bird in a quiet, dark place until you can bring it to a rehab facility. Do not touch it. Leave it alone.

3. Do not attempt to feed the bird. Raptors are strict carnivores and processed meat like we have in our homes is not good for them.

4. Recognize and respect that the bird is a wild animal. If it appears tame, which is sometimes the case if the bird is suffering from head trauma after being hit by a car, there is something wrong with it and it needs expert care. It does not want to be cuddled or petted or brought out for friends to see. Put it in a box large enough for it to stand up in, leave it alone, and get help.

« Back to Takeover Tuesday
My daughter and I have visited OBS at least a dozen times to enjoy trails and special events. Always awesome!
Patrick Shira